Home » Business » Are We Ready to Laugh About Covid-19? A British Sitcom Hopes So

A British family is walking along a frigid beach, treating a fall vacation like it’s a restaurant entree everyone wants to send back to the kitchen. The whole expedition is a lame Plan B. The Jessups were originally going to Disneyland, followed by three days of hiking at Yosemite. Then the coronavirus struck and sunny California was out of the question. Now the clan is making do in Margate, a forlorn British seaside town that peaked decades ago.

“I love that you want to experiment with stuff,” he quietly tells her, “but I think I’ve gone off the idea of using the gear.”

“Well, I wish I’d known that before squeezing it into the suitcase,” Rachel replies. “Leather is extremely difficult to fold, you realize.” 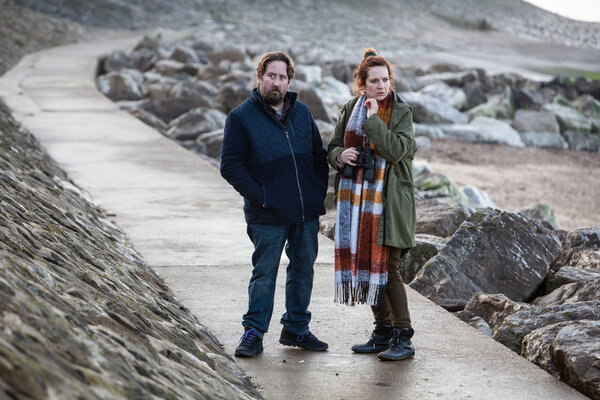 This awkward exchange is brought to you by the BBC. It’s a scene from the pilot episode of “Pandemonium,” a half-hour comedy, set to air Dec. 30, that poses a bold question: Are we ready to laugh about Covid-19? Or rather, is there anything amusing, or recognizable in a humorous way, about life during a plague, with all of its indignities and setbacks, not to mention its rituals (clapping for health care workers) and rules (face masks, please).

Television has already tackled life under quarantine, with shows such as “Connecting” on NBC and “Social Distance” on Netflix. But they focused on online conversations, largely restricting the characters to the cameras in front of their computers. “Pandemonium” is at once more conventional and bolder. The story unfolds in the family’s house, its car and then on vacation — a high-degree-of-difficulty venture in the midst of a pandemic.

The challenges are evident on a brisk November afternoon, as the cast and crew mill around a railing by a stretch of beach in Margate. It is the final day of a six-day shoot, and the director, Ella Jones, is orchestrating a few takes of Paul (played by Jim Howick) explaining his sex toy change of heart to Rachel (Katherine Parkinson). Hair and makeup artists hover, a small production team arranges and tweaks cameras, microphones and monitors.

As in every television production, the roughly 30 people at work here look like a nomadic tribe with a lot of expensive equipment. But Covid-19 has imposed a host of unusual restrictions and protocols. Everyone wears a colored wrist band. Red means you are part of the testing regime and can get close to the actors. Yellow means you are not part of the regime and must keep your time near the red bands to a minimum.

As an added precaution, actors are prohibited from touching car door handles. A full-time production assistant, a sort of Covid cop, is charged with roaming the set and ensuring that virus protection rules are being followed.

“I think she’s telling those people to stand farther apart from each other,” said Tom Basden, who wrote “Pandemonium” and plays Robin, Rachel’s depressed and chain-smoking brother. He was pointing to the woman policing coronavirus guidelines, who, it turned out, was squeezing sanitizer into the hands of a scrum of people.

Mr. Basden’s original script was Covid-19 free. The idea was to write a comedy about a family that was filmed entirely by the son — sometimes surreptitiously, usually not — with his video camera, a GoPro camera and a drone he bought himself. The lad was less a snoop than a budding documentarian. The conceit would give the standard family comedy a mockumentary twist.

The BBC’s head of comedy, Shane Allen, greenlit the project, and until May, he resisted the idea that the show should even mention Covid-19. One of his goals is to make programs that feel ageless, ensuring a long run on iPlayer, the BBC’s increasingly popular on-demand platform. There were 3.1 billion iPlayer streams in the first six months of the year, up nearly 50 percent from 2019, the BBC reported in August.

Initially, Mr. Allen thought that a show centered around Covid-19 would quickly feel dated. But by May, the virus had killed so many and upended lives around the world in such a way that it had become both unnerving and familiar. On April 20, the Sun, a British tabloid, ran this unforgettable teaser on its front page: “596 dead. See page 4.”

“By then, it felt like this huge political and social issue that we had to tackle,” he said in a recent interview. “We just needed to find a way to do it that was both cathartic and inoffensive.”

Selling Mr. Basden on a Covid rewrite was easy.

“I realized that there was a version of the story, which is about a California holiday not being taken because of coronavirus, that felt interesting to me,” Mr. Basden said. “I felt it had the potential to sum up the year for a lot of families in terms of what their experience has been, with all of the various disappointments along the way.”

Whether Britons need a “cov-com,” as Mr. Allen dubbed the show, remains to be seen. Viewers may prefer to watch anything but a reflection of what they have just lived through. If you’re looking for pure escapism, a show in which a doctor on television is heard intoning, “Stay inside, wash your hands, follow the guidelines,” isn’t for you. Alternatively, the show could turn the ordeals imposed by Covid into bittersweet entertainment by demonstrating just how universal their effect has been.

The show starts at a moment that now feels like eight years ago — namely, early 2020. The Jessups are booking their flights to California and Paul decides not to spend another $30 or so per ticket for refundable fares.

“We’re not going to cancel,” he tells his wife. “That’s just a scam to make idiots pay more money.”

The upbeat mood evaporates as the virus arrives. It shuts down Paul’s archery club, rendering him jobless. Robin, Mr. Basden’s character, is jilted by a woman who leaves him for her personal trainer. Now-familiar tensions and debates surface. At first, Paul’s mother, Sue, won’t take the virus seriously, exasperating her son. She also refuses to join in nationwide applause for National Health Service workers on Thursday nights.

“Clapping?” she asks Paul, outraged at the thought. “After they cancel my hip replacement? Are you mad? I’m the only one on my street booing.”

There are jokes that would fly over the heads of an American audience, like a reference to Dominic Cummings, the since-dismissed adviser to Boris Johnson, who made headlines by flouting lockdown rules. Other bits suggest that the United States still has substantial cultural heft here. When Paul tries to convince his daughter, Amy (Freya Parks), that he is woke, he proves it by noting that he read and loved Michelle Obama’s book.

For the BBC, the show isn’t the sort of gamble that it would be for any other British or U.S. network. The Beeb, as it is known, is supported by taxpayers, who are required by law to hand over the equivalent of $210 dollars a year for a license to watch live television. (Yes, watching without a license is a criminal offense, and it can cost offenders about $1,300 in fines plus court costs.) But the show is an ambitious bet. It will air on BBC1, essentially the nation’s default network and home to the programming with the broadest appeal. A comedy that finds an audience on BBC1 can turn into a cultural institution.

“There’s a lot of risk and a lot of failure when it comes to comedy,” said Mr. Allen. “But the things that do well stick around for years. Last year, Monty Python turned 50, and the surviving cast members did 10 sold-out shows at the O2 Arena. No other genre has longevity like that. Monty Python episodes are evergreens.”

If the pilot for “Pandemonium” gets good ratings and credible reviews, a full season will be ordered and it will begin filming sometime next year.

Putting together the pilot was, for obvious reasons, complicated. To keep preproduction, in-person meetings to a minimum, several members of the cast auditioned by sending homemade recordings of themselves reading their lines into a mobile phone.

“I sat in my bedroom and put my iPhone on a tripod and my girlfriend read the other character,” said Jack Christou, who plays Ben, the Jessups’ son and budding videographer. “Then I sent it off to my agent and waited.”

Soon he was getting a Covid test so that he could join other cast members for a few days of reading through the script at a BBC studio in White City, a district of London. Executives watched via Zoom. The Jessups’ home was filmed in Mill Hill, a suburb of London, over the course of three days. The wristband system was introduced, and anyone with a red band was tested daily. Yellow bands could enter the house for a few minutes if the actors were not in it.

“I was doing a shoot in Cornwall for another show, and they had to close it down because someone came down with Covid,” Mr. Basden said. “I think that has happened quite a lot, particularly on shoots that are for any length of time. We’re lucky this is just six days.”

The last three days were shot in Margate with the actors staying at a hotel where all the indoor common space was closed off. Many of the show’s vacation scenes take place outdoors, which curtailed Covid anxiety. The final scene shot on the last day of production follows the Jessups as they digest the news, read to them by Amy on her mobile phone, that Britain is going into its second lockdown, the one that started in October. Two members of the family decide on the spot that it’s time to end this cursed vacation.

“No, we are not going home!” Rachel shouts. “Let’s just press on for as long as we legally can.”

The scene was repeated a few times, with the director offering notes between each take. After the last one, the show officially wrapped, and the cast and crew whooped, celebrated and congratulated each other. Many couldn’t help offering Covid-be-damned hugs. Actors and crew posed on the beach for a photographer who wanted to capture the moment before everyone went home.

“Put on your masks,” someone in the bunch said. “The BBC is going to see this.”