Home » The Season of the Snitch

Your group chat isn’t safe. Neither is your unmasked frat party, your socially undistanced wedding — or your attempt to overthrow the United States government in a Viking helmet. They’re watching you; they’re reporting you; “they” may even be someone you love.

Throughout the past year, American society responded to political upheaval and biological peril by turning to an age-old tactic for keeping rule breakers in check: tattling.

From F.B.I. tip lines to social media blasts, Americans used all available avenues to alert the proper authorities — and the global public — about who from where was acting up.

Gossip (and its more fraught cousin, informing) is as old as civilization, but perhaps never has there been so little to do and so much to tattle about. With the pandemic, new rules for safety and social engagement were crafted overnight, and in part because they were never mutually agreed upon — by countries, governments, neighbors, families or colleagues — snitching offered people a way to feel as if they were doing something good, at the expense of anyone who seemed to be doing something wrong.

The Culture of Receipts 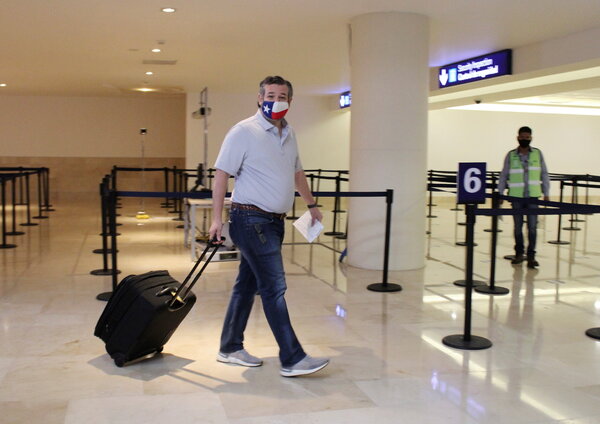 After photos emerged last week of Senator Ted Cruz of Texas leaving for Cancun during the middle of a catastrophic snowstorm that killed many Texans and may be the costliest emergency his state has ever seen, social media went into overdrive.

Reporters found his name on flight manifests, Twitter exploded with mocking hashtags including #FlyinTed, and a photo went viral of the Cruz family poodle Snowflake staring forlornly out the front door of their empty home.

Senator Cruz initially said that he left the state as a chaperone for his daughters, who wanted to go on a trip with friends, in order “to be a good dad.” But within hours, that narrative was undercut by leaked text messages that showed, the day before, Senator Cruz’s wife Heidi complaining about the “FREEZING” temperatures in her home and inviting friends and Houston neighbors to join her family at the Ritz-Carlton in Cancun, where, she said, rooms were only $309 a night.

Condemnation of the senator’s harried escape and obfuscation was immediate and nationwide, even coming from some of his fellow Republicans. It didn’t help that he had previously called other politicians “hypocrites” for doing somewhat similar things.

Speaking on a podcast on Tuesday, Senator Cruz said his wife was “pissed” that screenshots of her group chat had been leaked, and he criticized whomever was responsible for violating neighborly bonds, using coarse language.

Still, nobody could deny that the leaker “had the receipts” (a popular slang phrase meaning evidence of malfeasance). The proof of the Senator’s lie was, as receipts were once memorably described, “currency in the people’s court.”

People have always reveled in exposing the hypocritical acts of politicians, but over the last year the cooped-up masses began regarding one another with the same wariness.

As the spring lockdowns were put into effect, people began sharing social media posts as evidence of their peers not distancing, or to identify businesses that were failing to enforce safety measures. In Wisconsin, a local doctor was suspended after being photographed at a rally against masks in April; across the country, governments created hotlines for people to raise concerns related to the pandemic. Last March, Los Angeles mayor Eric Garcetti encouraged people to report businesses that violated Covid-19 safety laws, declaring: “snitches get rewards.” (Rewards were not actually offered.)

The NBA also created a hotline for its players to report on each other while they were playing in their sealed quarantine bubble for the 2019-20 season. “To all my fellow NBA players, don’t call the snitch hotline,” Brooklyn Nets player Spencer Dinwiddie told Bleacher Report, after several players reportedly called in with complaints. But also: “Don’t cross the line to get Postmates.”

College campuses emerged as snitching hotbeds: In some cases, universities including Yale and N.Y.U. set up hotlines for students to report Covid-related complaints; in other cases students took measures into their own hands. A Cornell student apologized publicly after she was shamed for posting a Snapchat from a party. “Nobody likes snitching — it’s not comfortable,” a Cornell sophomore named Melissa Montejo, who signed a petition criticizing that student, told The New York Times. “I really am not one to go around and tell people what to do, but for me, this was troubling. Three months of being careful and not engaging in problematic behavior is worth saving a life.”

It seems inevitable that some college students would choose to socialize despite the risks; by reopening their campuses, universities essentially forced panicked students into the difficult position of reporting on their peers to keep themselves safe.

It didn’t always work. Even as their peers snapped photos of them through their windows, many students at campuses around the country continued partying. At the University of North Carolina, an account called “Where Y’all Going?” posted photos of maskless socializing among students; so did one at Santa Clara University called “Snitch SCU,” and another at Cornell called “Cornell Accountability.”

College students weren’t the only ones using anonymous accounts to enforce Covid-19 safety norms. An account called “Gaysovercovid” was just one of many that emerged over the summer last year to post user-submitted photos, this time of crowded, mask-less beach parties in vacation destinations like Puerto Vallarta, Mexico.

Much of the social media scolding of those flaunting the rules could be lumped into the category of “corona-shaming.” The roasting was intended to embarrass, and not as an appeal to authorities.

But it has made for an energizing flash point in the ongoing culture wars. An August 2020 segment on the Fox News show “The Ingraham Angle” — titled “Colleges turning students into Covid-19 snitches” — denounced the campus hotlines, while a Feb. 2021 segment on the show titled “Biden’s Snitch Patrol” mentioned Mayor Garcetti’s pro-snitch comments and a teen who turned in her mother for rioting at the Capitol, declaring that “these seething snitches have more in common with the old-fashioned Soviet thought police than they have with the free speech liberals of the 1970s.”

In some cases the snitching backlash has left the realm of television grievance and entered the real world, to disturbing effect. In a December speech, Dallas Heard, an Oregon state senator, encouraged local businesses to file public records requests to find out the names of individuals who had made workplace complaints over Covid concerns — snitching on the snitches, so to speak.

Then, a group called Citizens Against Tyranny that Mr. Heard belongs to posted the names of two senior citizens on its website, accusing them of filing complaints and describing them as “filthy traitors” in a font designed to look as if it was splattered with blood, according to The News-Review, a local paper in Roseburg, Ore.

The post was later removed. On Feb. 22, Mr. Heard was elected chair of the Oregon state Republican Party.

Turning in Our Parents

One of the largest instances of mass digital snitching in history took place following the Capitol riots on January 6, when internet users began combing through the astoundingly large amount of photo and video evidence generated by the event in order to identify those who’d stormed the Capitol.

America is a nation of hometowns, and the riots featured bad actors from hundreds of them. Police officers and firefighters and car dealers and elected officials were identified among the crowds. By poring over the footage with a local’s eye, any concerned member of the public could become a freelance consultant working on matters of national security.

The F.B.I. opened up hotlines for people to send in tips; by January 26, it had received more than 200,000. The event was something of a watershed for armchair social media sleuthing, a practice with a checkered modern history of misidentifying people as suspected criminals.

But the available technology, and the amount of material to comb through, has grown exponentially. Some people used facial recognition software to identify rioters; others used the facial recognition capacity of their own brains to identify old friends and former lovers, neighbors, high school classmates and distant Facebook connections. A man from Freeport, N.Y. was arrested after sending a selfie from inside the Rotunda to his brother in law, a federal agent. One woman turned in her ex-boyfriend after he called her a “moron” in a text for not believing that the election was stolen.

Several people turned in their own parents. The Times reported that Jackson Refitt, 18, was told by his father, Guy W. Reffitt, that he would be killed if he reported him to the police for participating in the riots. But Jackson already had.

Another person who flagged a parent’s participation in the riots was Matt Hess, 29 (The Times agreed to identify him using only his middle and last name, because he has experienced harassment online.) He was disturbed when he saw photos of his mother in the crowds outside the Capitol building. “I slept on it, then the next morning I made a post on Facebook calling out my mother’s behavior,” he wrote in an email. “Around that same time, I submitted a tip to the F.B.I. that my mother was part of the coup, and included the pic of her at the Capitol.”

Mr. Hess noted that he didn’t see photos of his mother inside the building, just outside it; she has denied entering the building. Still, he felt obligated to act. “Turning my mother in for her role was, well, easy and difficult,” he wrote. “As far as I was and am concerned, she knowingly took part in an attempt to overturn the will of myself, my friends, and millions of other Americans, and this fact needed to have a trail.”

His decision turned much of his family against him. “Obviously, this has further decimated my relationship with my mom and stepdad; but it has also pushed away my grandparents, aunts and uncles, possibly others,” he wrote.

Mr. Hess’s mother was not arrested, but he believes he did the right thing. “I am confident that this coup was an expression of fascism in America, and I am confident that fascism everywhere needs to be squashed before it can spread,” he wrote.

Maybe You Should Close All Those Tabs

Technology, and our abiding love of it, is crucial to our current moment of social surveillance. Snitching isn’t just a byproduct of nosiness or fear; it’s a technological feature built into the digital architecture of the pandemic era — specifically when it comes to software designed for remote work and Covid-tracing.

During the pandemic, some businesses began paying for services though companies including ActiveTrak, Hivedesk, Teramind and Time Doctor that offer employers the ability to track how workers are spending their time on the computer, lest they waste it on scrolling social media or online shopping.

Contact tracing apps emerged as snitching’s beneficent public health application this year. They have helped significantly stem the rate of coronavirus infections and deaths in many of the countries that actually used them. But they have started to be adapted for other uses, including criminal probes by the Singaporean government.

If that seems distinctly worrying, it might be useful to remember that the world’s most powerful technology companies, whose products you are likely using to read this story, already use a business model of mass surveillance, collecting and selling user information to advertisers at an unfathomable scale. Our cellphones track us everywhere, and our locations are bought and sold by data brokers at incredible, intimate detail. Facial recognition software used by law enforcement trawls Instagram selfies. Facebook harvests the biometric data of its users.

The whole ecosystem, more or less, runs on snitching.

Valkyrae Gets a Big Chair in the Gaming World