It was the classic tale with a twist: Victoria Hogan was always the officiant, never the bride.

The 35-year-old owner of a Las Vegas-based pop-up wedding company, Flora Pop, had single-handedly married more than 3,000 couples over the past seven years before she finally had an opportunity to stand in the spotlight.

“It was an interesting dynamic, being a wedding officiant who wasn’t married myself,” said Ms. Hogan, a Universal Life Church minister. “For a long time, it was kind of a difficult experience, because I believed that my romantic heart was what led me to this in the first place.”

Ms. Hogan doted on her couples, giving sound advice: Have grace with your partner, she would tell them, have compassion and love yourself first. Then it will radiate into your relationship.

Her own love life, though, was in shambles, and she felt like her romantic partners were never on the same page as she was when it came to the relationship.

But when the pandemic hit, and Ms. Hogan started taking lots of solo walks, she spotted a familiar face hunched over a book in a coffee shop close to her home in Las Vegas. It was a friend of a friend of a friend, someone whom she had often seen out drinking in Las Vegas — but not someone she ever spoke with or considered could be meaningful in her life.

“She saw me reading a book, and probably thought there was more going on in there,” said Stephen Fetterusso, a 34-year-old hairdresser. “I was probably reading some nerdy fantasy novel, to be honest.”

Regardless of the book’s subject matter, Ms. Hogan was intrigued. She waited two weeks, and then started commenting on his Instagram posts — which, she quickly realized — were quite similar to her own Instagram posts. They were both obsessed with old Vegas, Elvis and architecture. 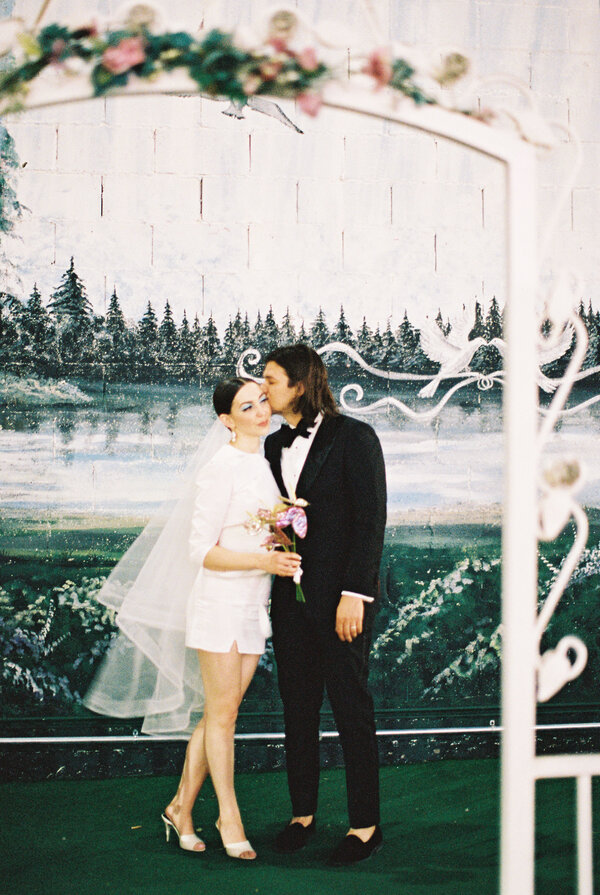 After chatting via social media for a few months, the pair decided to meet. Mr. Fetterusso went to Ms. Hogan’s backyard, where they sat approximately 20 feet apart, just to be safe.

“We had a really nice evening, but we were shouting at each other from across her backyard,” Mr. Fetterusso said.

They continued meeting, fully masked, outdoors, taking social distancing very seriously. Void of social cues and official dates, neither could determine if the other was interested. Both were very interested.

“We went on walks, and he would walk on the other side of the street,” Ms. Hogan said. “For someone who has a hard time reading whether or not someone is interested in me, it was exceptionally hard over the pandemic. We couldn’t hug each other, and the masks were a hindrance in reading social cues.”

As they started feeling more comfortable around each other, Ms. Hogan invited Mr. Fetterusso over to watch one of their favorite movies, “Viva Las Vegas.” After the movie finished, she turned to him and said, “‘You know I’m into you right?’” And they finally kissed.

Their “dates” continued, and they shared a bottle of wine in the park; they hiked; they took Ms. Hogan’s 10-year-old rescue German shepherd, Rhubarb, for a walk.

It felt casual, but there was a strong connection, Ms. Hogan said. So one morning in October, as they were laying in bed, she grabbed her great-grandparents’ wedding bands, and asked Mr. Fetterusso to marry her.

Finally, Ms. Hogan would get to plan her own wedding, after helping so many others plan theirs. She set the date for April 5, 2021, and was determined not to be a bridezilla.

“I wanted something simple,” Ms. Hogan said. “We hopped in the car, went around the corner, got married and enjoyed a nice dinner together.”

The wedding at A Little White Wedding Chapel was just the two of them plus Ms. Hogan’s photographer friend and Michael Conti, a Universal Life Church minister and Elvis impersonator, who officiated. Ms. Hogan always preached to her couples that weddings should not put you into debt, they don’t need to be an over-the-top affair.

Now, she was able to put her words into action. She is able to guide her couples more confidently, now that she, too, is married.

“My advice is still similar to what it was before, but I can own it with more conviction now,” Ms. Hogan said.