Late one evening 55 years ago, in the winter of 1966, an Irish-American teenager named Gwen Taylor climbed through the window of her family’s house in Coalinga, a small town in California’s San Joaquin Valley, and, flipping up the kickstand on a bicycle parked outside, pedaled by moonlight through the vineyards of this farming region, and across Interstate 5 to a town called Huron.

No more than 15 miles separated two places that were, in crucial ways, universes apart. As late as the 1960s, the inhabitants of Coalinga, a onetime railway coaling station, were primarily Caucasian, whereas Huron was populated largely by Mexican Americans or Mexican migrants who regularly risked the illegal border crossing in search of seasonal work harvesting the world’s tomatoes, melons, sugar beets, grapes and asparagus.

“My mother hates when I tell this story,” the designer Willy Chavarria said over a glass of chilled white wine on a recent rainy evening, referring to his origins as the son of a white girl from a “sundown town,” where it was once thought unsafe for those with brown skin to be seen after nightfall, and of William Robles Chavarria, a migrant worker himself and an activist whose mother on occasion fed Cesar Chavez, the legendary civil rights activist and co-founder of the National Farm Workers Association, at her kitchen table.

“My parents met in high school, which began to be integrated only after the civil rights movement,” Mr. Chavarria, 54, said. “She used to sneak out of the house and ride to Huron through the crop fields to see my father.” And then unexpectedly, in July 1967, “little Willy came along.”

In order to understand Willy Chavarria and his decades-long rise through the ranks of fashion, first as a journeyman designer for mass-market labels like Joe Boxer, Ralph Lauren and American Eagle to the founding in 2015 of a critically lauded indie label and his surprise hire early this year as a senior vice president at Calvin Klein, it helps to understand his origins. 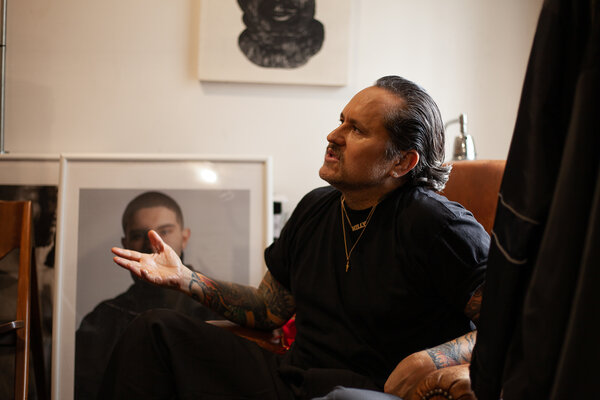 A queer man of mixed race, a son of working-class folk, Mr. Chavarria may be the most highly placed Latino currently at work on the creative end of the American fashion industry. Though not yet a household name, he soon should be, say industry experts familiar with Mr. Chavarria’s outsize gifts and unusual career.

“He’s obviously a huge talent,” Karla Martinez de Salas, the editor of Vogue Mexico, said recently. “But it’s in terms of representation that his appointment is an even a bigger deal.”

Mexican American herself, Ms. Martinez related a story of growing up in El Paso, where she passed a large part of her childhood trying to “fit into” an Anglo-dominated culture, one that expected people like her to alter themselves to conform to Eurocentric beauty ideals. “Growing up a slightly dark-skinned kid, a Latina, in the U.S., there was nothing speaking to us,” she said.

“And before Oscar, Narciso and Carolina came along, there was nothing at all,” Ms. Martinez added, referring to Oscar de la Renta, Narciso Rodriguez and Carolina Herrera — Americans of, respectively, Dominican, Cuban and Venezuelan ancestry. And before Mr. Chavarria, there wasn’t anything at the commercial or street level to speak to the complexities of a Latino population that Census Bureau figures put at over 60 million, a group that defies any attempt to reduce or define it according to monolithic stereotypes.

“The potential effect of having someone who understands all of our dualities at a label as influential as Calvin is just incredible,” Ms. Martinez said.

Jess Lomax, the creative director for global design at Calvin Klein, was a senior creative director at Nike before she was named in late 2020 to help right a listing corporate behemoth. “Willy was an obvious hire, one of the very first additions I made,” Ms. Lomax said.

“I’d followed him for some time,” she added, citing among his many strengths Mr. Chavarria’s solid formalism, adventurous play with proportion, rootedness in his own culture and lifelong embrace of diversity in all its dispersions.

As much as anything, it was his democratic vision of fashion that attracted her to Mr. Chavarria, said Ms. Lomax, who is seeking to radically recast the corporate vision of a premier American label, one that somehow lost its way under the direction of the Belgian designer Raf Simons.

“Beauty, cultural relevance, how a product connects to a customer — all of that is so, so important,” Ms. Lomax said. “Willy brings all of that.”

Case in point: Mr. Chavarria’s quiet role in devising Kanye West’s Yeezy Gap collaboration, created over a two-year period during which, despite the travel restrictions imposed by the Covid-19 virus, Mr. Chavarria commuted regularly from Copenhagen, where he lives with his husband, David Ramirez, a vice-president at the Danish Pandora jewelry company, to Mr. West’s ranch in Cody, Wyo., and his compound in Calabasas, Calif.

Though Mr. Chavarria is tight-lipped about what part he played in forming the collection, referring to himself modestly as a “consultant,” anyone familiar with his work can detect his hand in designs like the collarless $200 “round jacket” puffer Mr. West teased on Instagram in June and that sold out so quickly that examples are now being offered for as much as $1,500 on Grailed and other websites.

“One of the genius gifts Kanye has is that he is constantly scouring the world for talent,” said Mr. Chavarria, whom Mr. West contacted in 2018 after spotting a review of a Chavarria show at New York Fashion Week: Men’s that the designer had staged in the beer-scented hallways and back rooms of the venerable gay leather bar, the Eagle, which opened for business in 1970.

Taking aspects of “lowrider style,” like crisp oversize shirts, their shoulders dropped and ornamented with ruching; or skirt-wide khakis he termed “cholo pants” and then cinched with karate obis; or tracksuits with satin inlays shown under studded biker jackets and accessorized with gnarly studded belts or leather Muir caps no self-respecting leather daddy would be seen without, he produced results that were as starkly beautiful as they were original and unexpected.

“I wanted to use from my past the beautiful things that emerged when I was growing up around Chicano culture,” Mr. Chavarria said then. He seamlessly married those tropes to stylistic elements of a scene he may never have participated in but had long admired from afar.

Mr. Chavarria cast that show, titled “Cruising,” as he has each successive one since he incorporated, with an array of models drawn both from inside the industry and far outside its customary reach. Take a casting for his next show, “Cut Deep,” which was inspired by delivery men, he said, and is set to take place on Sept. 8 at a storied barbershop on Astor Place.

For this show he instructed his casting director, Brent Chua, to send out a call for young guys with, yes, agency representation, but also ordinary types with the sort of everyday beauty few bother to notice because, as Mr. Chavarria said, “nobody bothers to look up at the DoorDash guy.”

“I’d been in the business so long before I went out on my own that the point became not so much seeing how much volume you could sell, but how much beauty you could create,” said Mr. Chavarria, whose Joe Boxer days were governed by sales goals rather far more than design. “It was how many banana print boxers do we need to sell.”

That he intends, at his own label and at Calvin Klein, to build something culturally reparative could be sensed from the responses of the hopefuls that turned up for the casting: construction workers and musicians and street-scouted newcomers, few of whom had considered themselves beautiful, let alone marketable to the restrictive sphere of fashion, as it turned out.

They were men like Elias Priddie, 24, a soulful-looking day-laborer and sometime bare-knuckle boxer from the Bronx, who “never even thought I could be good-looking,” as he explained. They were men like Chachi Martinez, 28, one of Mr. Chavarria’s designated muses, “a total sweetheart, though he does look kind of scary,” as the designer said, owing to Mr. Martinez’s abundant SoCal gang-style tattoos.

Or they were lanky types like Antonio Macek, 20, a longhaired former amateur hurdler of Black and Czech ancestry who had grown up being termed either too pretty or plain ugly or told he was weird. “I was looked at as different because I didn’t look like a normal person,” Mr. Macek said.

“There are so many ways in this world in which we are kept, or we keep ourselves, from being beautiful,” said Mr. Chavarria, who has held onto a SoHo apartment, as much as anything for its easy access to Tompkins Square Park in the East Village, one of the last bastions, in a fast-homogenizing city, of racial and gender diversity.

“There’s this really damaging loss of psychic and even physical territory if the culture never gives you any confirmation of your type of beauty,” Mr. Chavarria said.

Imagine, said Corey Stokes, the fashion director of Highsnobiety, that one’s daily experience resembled that of Mr. Macek, the ex-athlete told all his life he looked strange. “I get chills when I think about being in the most impressionable years of your life and not being represented,” Mr. Stokes said. “Not thinking of yourself as anyone’s idea of beauty: think how that shapes the way you see yourself and your entire future.”

Steven Kolb, the executive director of the Council of Fashion Designers of America, recalls that when he was introduced to Mr. Chavarria, he was first struck by his experience with other commercial brands, an important element in a field that tends to attract creative people with no business experience. It was only after Mr. Kolb invited the designer to show under the CFDA’s big tent in 2015, soon after Mr. Chavarria went into business for himself, that he understood his true mettle.

Mr. Kolb’s decision was to prove controversial, as he soon found, when the designer mounted shows featuring models of all genders or none in particular, well before such castings had become routine industry practice; showed his work on models in cages built to symbolize the plight of border detainees; and cast undocumented immigrants to walk the runway in his shows.

“What struck me, though, was that Willy’s commitment to culture and cause or purpose was equally or if not of greater importance to him than commercial success,” Mr. Kolb said. “His purpose is standing for something beside the clothes. Sometimes when you hear that from designers, it doesn’t feel authentic. It feels like marketing. But that is not the case with him.”

This above all is why having someone like Mr. Chavarria step into “such a huge role” at one of the most widely distributed and potentially influential labels in the world is so significant, Highsnobiety’s Mr. Stokes explained.

“It is a giant step in the direction of making sure that people are seen. That is a huge thing, though keep in mind it’s not the only thing. Consumers don’t only want to be ‘seen’ in some marketing sense. They want to feel as if they are actually being considered.”

The ability to deliver on that notion is what Mr. Chavarria found most “magical” about being offered a top job at Calvin Klein. “When you think about how Calvin Klein succeeded, what was it?” he said. “Sure, he made sales, but his real genius was understanding image and how to include people in something that took them beyond themselves.”

‘About Time: Fashion and Duration’ Examines Enduring Styles Since The Met Was Founded