Among the late Karl Lagerfeld’s personal convictions was that one’s health is an unseemly, impolite topic for conversation.

So Sébastien Jondeau, Karl Lagerfeld’s longtime bodyguard and personal assistant, admits that Lagerfeld — who died on Feb. 19, 2019 — would probably be none too pleased that his new book chronicles the designer’s four-year battle with cancer in detail, from the first signals — problems relieving himself — to the immunotherapy and radiation treatments, hospital stays, fluid retention and all the ups and downs of a terrible, relentless disease.

Jondeau had booked the private plane, having seen Lagerfeld rally many times from his illness, known to very few in his inner circle and kept out of the press, thanks largely to the vigilance and ingenuity of Jondeau, who battled to protect Lagerfeld for two decades.

“He continued to work, he continued to do photoshoots, to do campaigns, to do collections — everything,” he marveled in an interview. “For me, Karl was kind of a hero to face it like this.”

Indeed, toward the end of the 220-page book, he anoints Lagerfeld “the Muhammad Ali of fashion. You were knocked out standing, until the last moment on the phone with Fendi in Milan.” 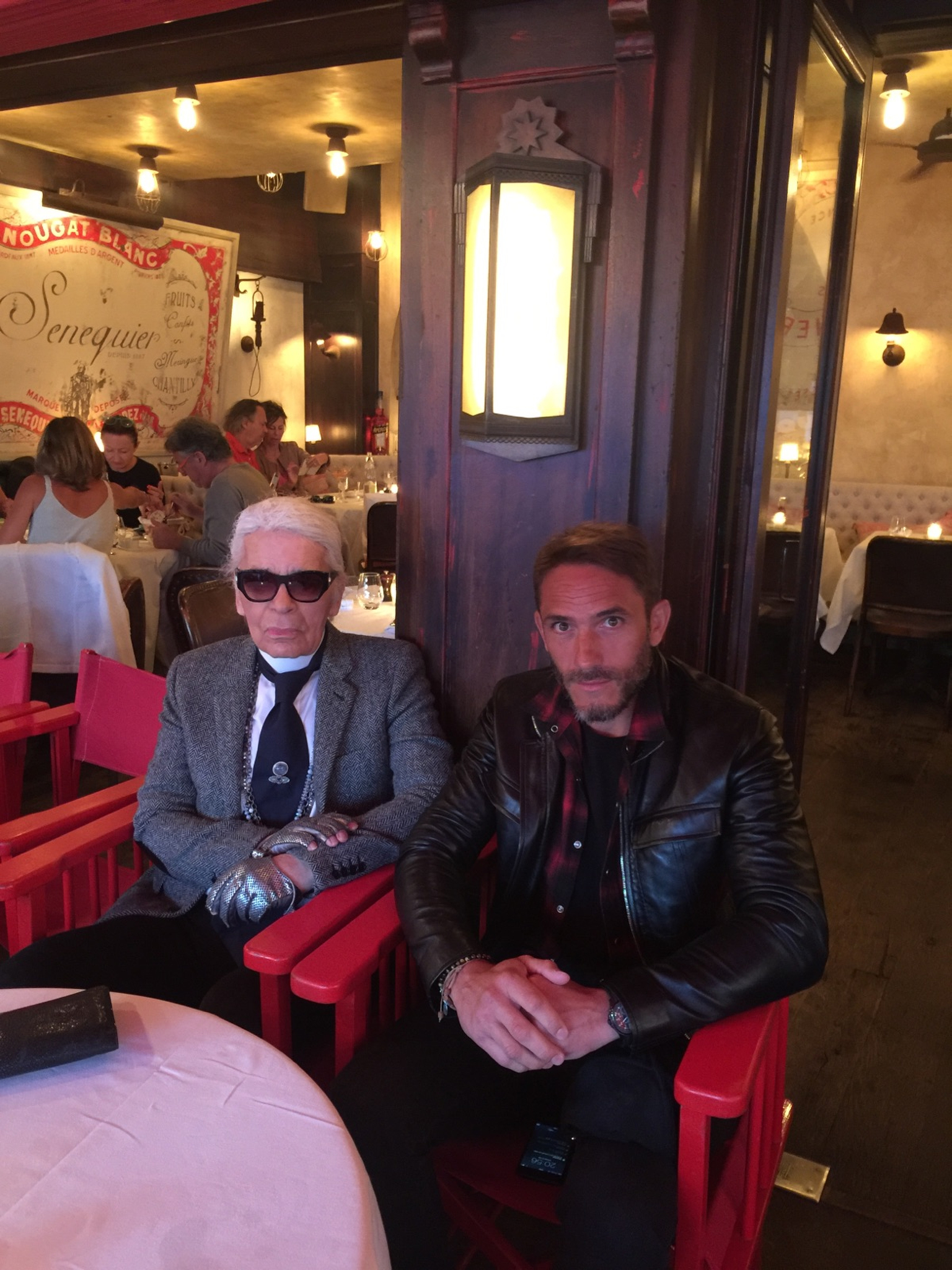 The book reveals Jondeau to be a warrior also, having scrabbled his way from a rough-and-tumble upbringing to working for one of the world’s greatest fashion designers, and also rebounded from the death of his father and mother from cancer, in 1999 and 2003, respectively, and many failed romances, mostly his fault, he admits.

The 45-year-old wanted people to know that a fairy-tale life is possible — and without ever forgetting your roots. To be sure, the strapping Jondeau brought more than muscle and street smarts to his all-consuming job as Lagerfeld’s right-hand man. His work required charm, diplomacy and initiative — and he delivered in spades.

In an interview, Jondeau allowed that Lagerfeld ultimately became a treasured friend, confidant — and a father and mother figure, too. “I spent more time with him than my own parents, my own family,” he said. “It was six days a week, and from morning until late at night. It was 24/7 until the end.”

Yet he never forgot that the designer was his boss and that his job was an important one. He never wanted to let Lagerfeld down, and he didn’t — even completing the last task asked of him: making sure his ashes were released into the Mediterranean Sea. 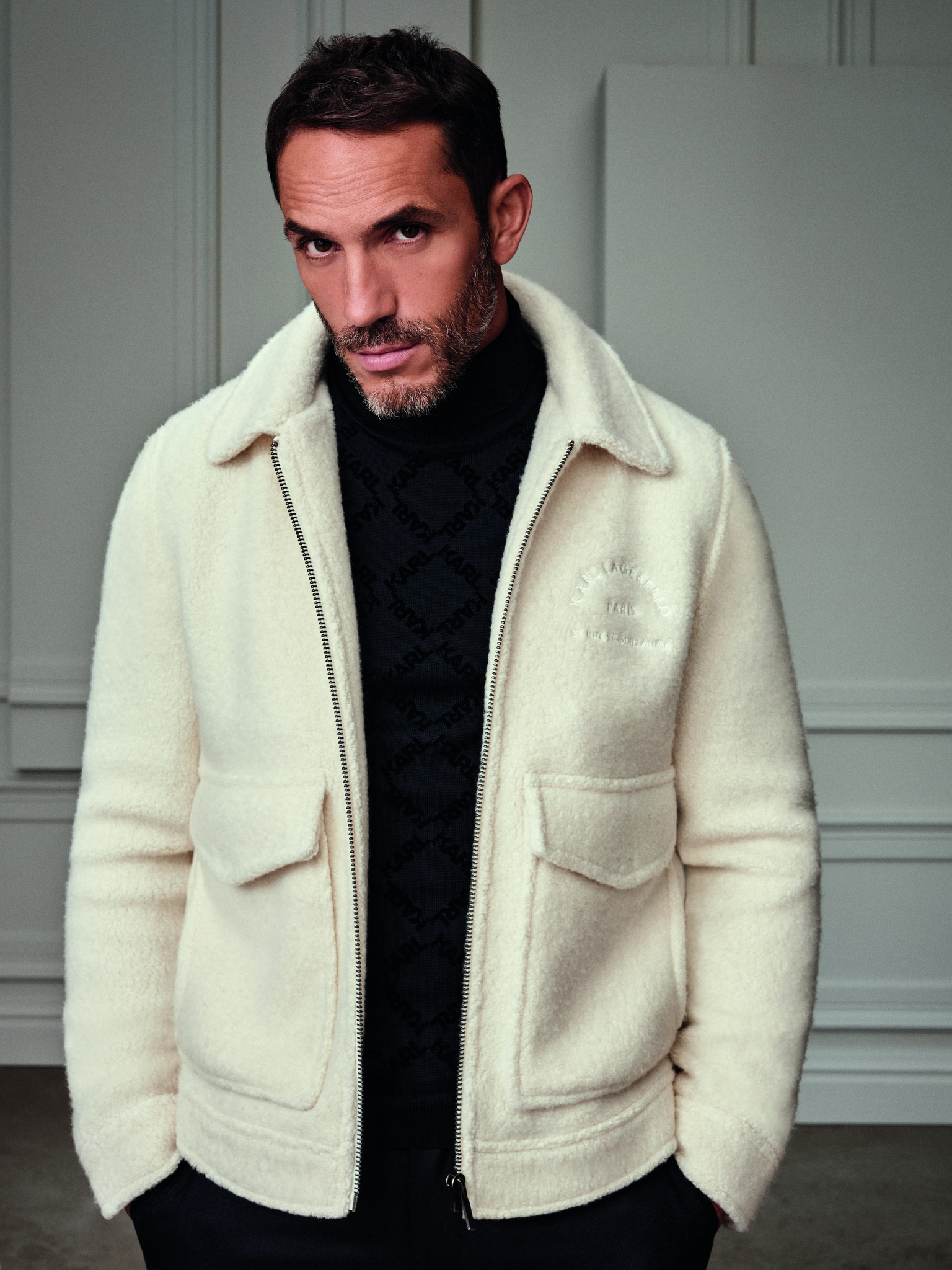 Jondeau also obeyed Lagerfeld’s urging that he should not work for anybody else, and so he continues his role as an ambassador and consultant for the Karl Lagerfeld brand and contributing to the creative team at Fendi on sport-related clothing and accessories.

While he is often lumped in with the other prominent and handsome men in Lagerfeld’s entourage — the models Brad Koenig, Jake Davies and Baptiste Giabiconi — Jondeau stressed in the interview that he was an employee first and foremost, not an amusing part of the designer’s social circle. In the book, he is wise to Lagerfeld’s Machiavellian ways, and the self-interests of the models, noting how Koenig always ordered the most expensive thing on the menu.

“It’s not very easy when someone chooses your friends for you,” he said diplomatically. 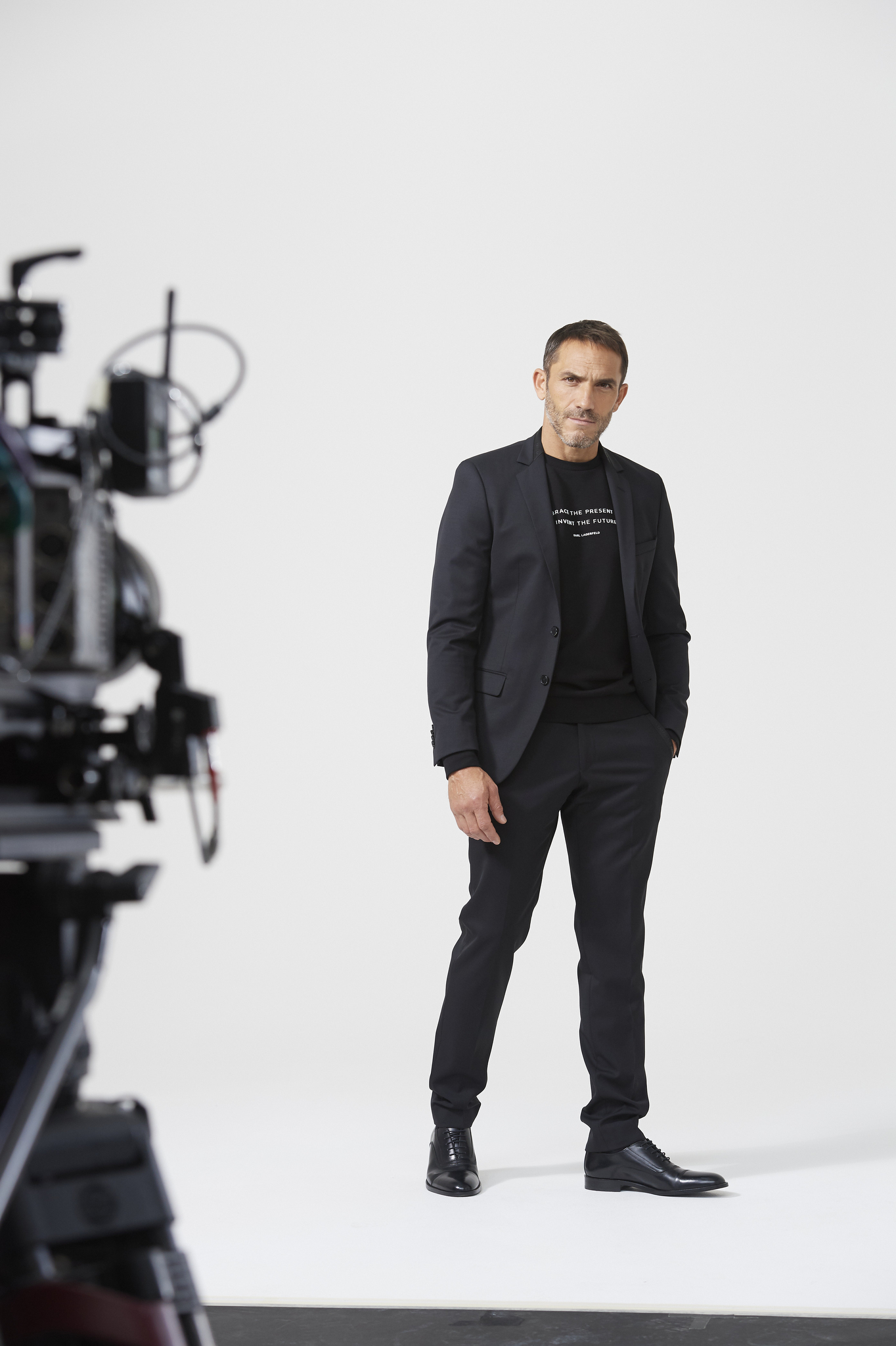 His book, written in collaboration with renowned French fashion journalist Virginie Mouzat, unfurls in a series of recollections, as if randomly plucking Polaroids of his life out of a shoebox and explaining them. Mouzat, best known as Le Figaro’s longtime fashion editor, insisted on keeping Jondeau’s voice, and it is loaded with slang from the suburbs.

Jondeau lays bare his own battles and demons, describing a complicated relationship with his birth parents, and a tendency to be brusque and impulsive — rough edges that were partly smoothed over the longer he worked with Lagerfeld and his key deputies, notably Eric Pfrunder, who worked with the designer on Chanel’s image and his photo work.

He also doesn’t mince words regarding his taste for the ladies, recounting in graphic detail his first sexual encounter, and his many romances and relationships, identifying each woman with only an initial. He was engaged once, and Lagerfeld even threw a party to celebrate it, but a fear of commitment and other issues scuttled that affair, and countless others.

In the interview, Jondeau said he is exploring his relationship problems and unresolved family issues with a psychotherapist.

Like Lagerfeld, Jondeau boasts an incredible memory for detail, able to recount vividly events even from when he was four years old, such as when he stole a friend’s bicycle, went racing down a hill, only to discover his hands were too small to reach the brakes and he crashed into a lamppost, resulting in a forehead gash that required stitches.

Also like Lagerfeld, Jondeau took his job very seriously and worked extremely hard on multiple tasks, from managing the designer’s travels — a feat involving up to 30 pieces of luggage each time — to organizing sporting activities for Lagerfeld’s summer guests. 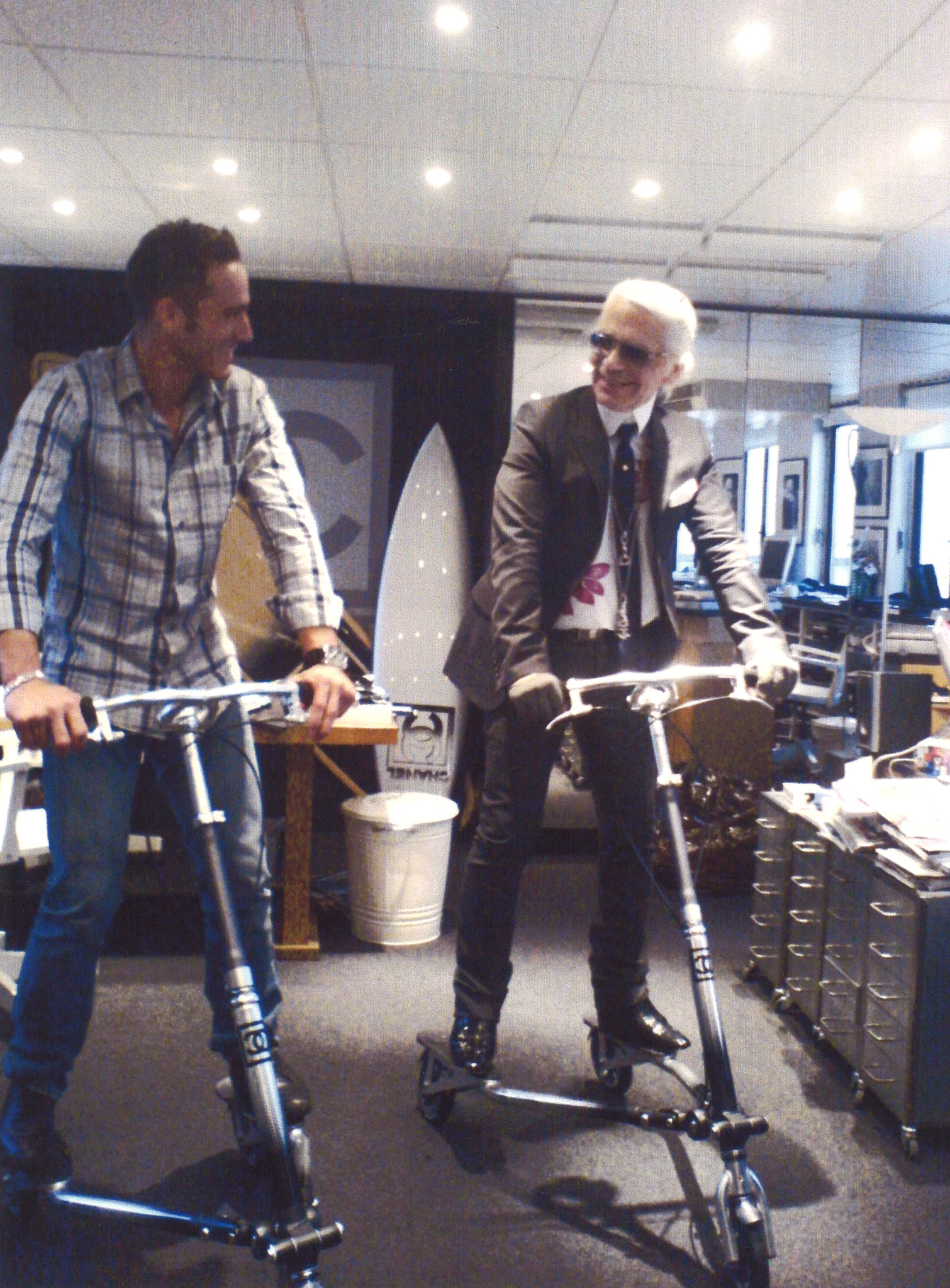 Jondeau’s wonder is palpable as he discovers the world at the elbow of the globe-trotting designer, agog to visit places like New York City, Cuba, Tokyo, Seoul and Shanghai as Lagerfeld mounted lavish fashion shows for Chanel and Fendi. During a swing through Los Angeles, Lagerfeld’s great friend Ingrid Sischy, the late editor in chief of Interview, had arranged for the designer to shoot a who’s-who of Hollywood, including some of Jondeau’s idols: Arnold Schwarzenegger, Benicio del Toro and Jack Nicholson.

Like Lagerfeld, Jondeau suffers no fools and skewers the ungracious, from singers Christina Aguilera and Marilyn Manson to hotelier Michel Reybier, owner of La Réserve in Ramatuelle.

Another photo shoot also sticks in his memory: When Helmut Newton came to take a portrait of Lagerfeld at his apartment at 51 Rue de l’Université. “I would have loved to ask Newton to take a picture of the two of us, but I didn’t dare and I regret it,” he writes.

No doubt Jondeau’s gap-toothed grin and six-pack abs have helped fan his fame on Instagram, where he enjoys 45,000 followers. But he credits Cara Delevingne for the lion’s share of those numbers. Seated next to the British model at the Bal de la Rose, a charity benefit in Monaco, Jondeau recalled how she snapped a selfie with him, posted to her Instagram account along with a link to @bentoub. The notifications came so thick and fast his phone almost self-destructed. 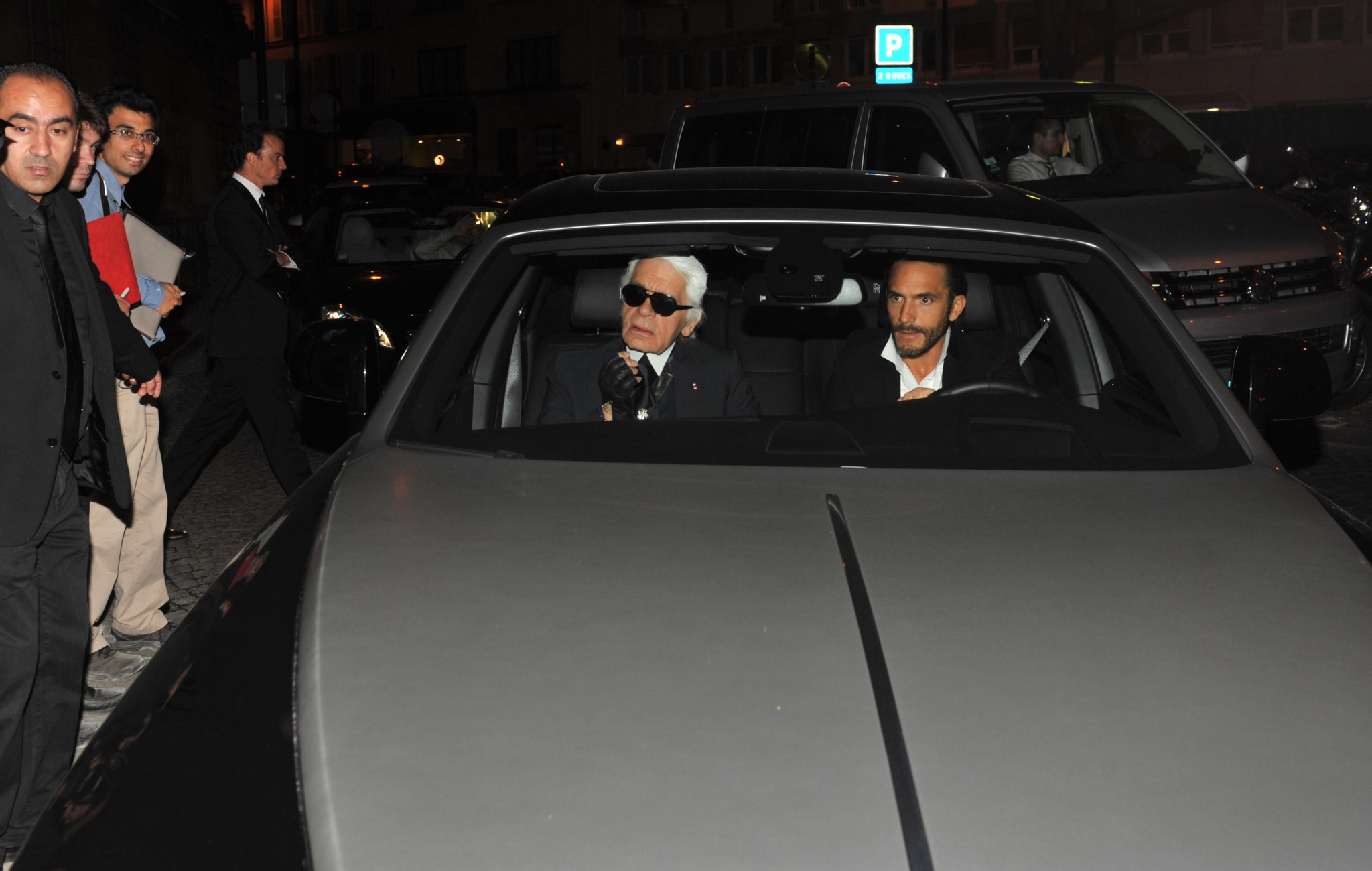 He describes him as a great boss, very demanding and exacting over the small details, but “pretty cool” about everything else.

Jondeau did his first job for Lagerfeld at 16, when he was working for his step-father’s moving company, and they struck up a rapport. Ever polite, the designer greeted every worker dispatched to move some of his 18th-century furniture, but he spoke to Jondeau at length.

Additional moving jobs segued into a full-time offer in 1999, with Jondeau acting initially as chauffeur and bodyguard, gradually taking on more tasks as the designer’s personal assistant and supervisor of the staff in Lagerfeld’s orbit.

His starting salary was 2,300 euros net a month, and his duties and remuneration grew quickly. Lagerfeld lavished Jondeau with clothes, gifts and pocket money, sharing his private plane and his glamorous lifestyle and encounters.

Jondeau recounts a chance meeting at the Mercer in New York with Kanye West, who was so eager to meet Lagerfeld and share a new track that he dragged the two men, plus Lady Amanda Harlech, into his Maybach parked in front of the hotel. West bounced in his seat as the song played at bone-rattling volume, while Lagerfeld sat ramrod in his dark glasses.

“When the song finally stopped, Karl blurted out, ‘Very good. Can I go back to the hotel now?’” he writes. 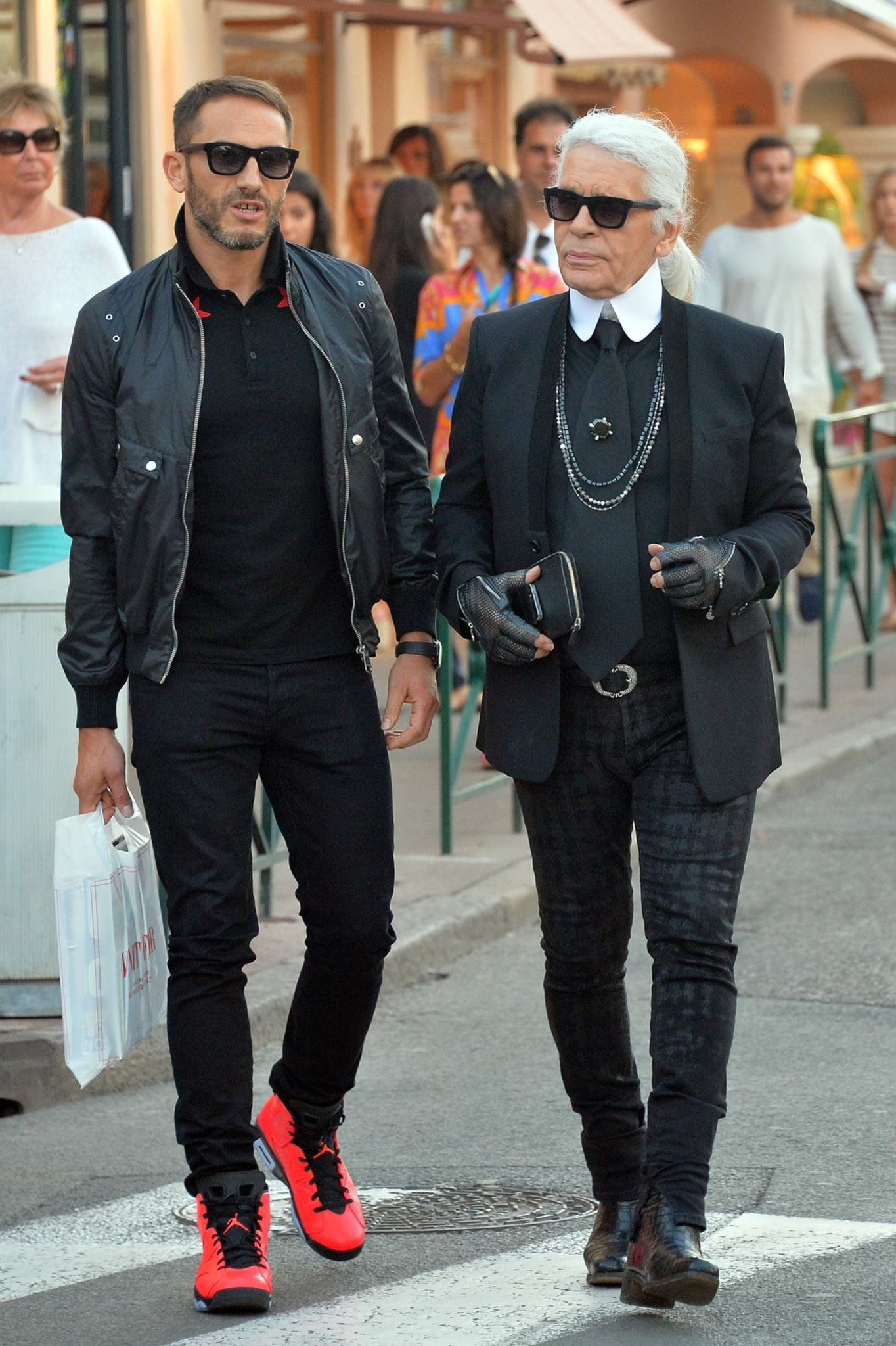 More touching encounters also occurred in cars. When Lagerfeld was weakened by cancer treatments, his appetite lagging, Jondeau would ferry him in the Rolls-Royce Phantom 8  to his favorite pizzeria, and once said, ‘Let’s try McDonald’s,” and the designer downed two cheeseburgers before they arrived back at Lagerfeld’s home. “This pleased me so much,” he writes.

Jondeau also vividly describes the harsher realities of the poor, gritty neighborhoods outside of Paris where he grew up, where drugs, crime and industrial accidents are part of life. Yet his connections to the people there remained steadfast, and many of his closest pals and their children all had brushes with Lagerfeld, who took a keen interest in Jondeau’s friendships, romances and travails.

Ever resourceful, Jondeau would protect Karl’s pocketbook also, frequently sending his buddies into antique stores Lagerfeld frequented to find out the “real price” of items, as opposed to the one fabricated for a wealthy fashion designer.

Looking ahead, Jondeau said he’s working toward opening a hotel in the south of France that would offer a broad array of sport activities, leveraging his passion for boxing, kite surfing, surfing, foil board, jet skiing, mountain biking, and all manner of training and extreme sports. He’s also in the throes of getting his pilot’s license and would love to take up sailing.

Besides his fashion projects, he is also partner in an event security firm called LPN run by some of his pals.

“I mix fashion and sport and the street, because I came from the street,” he said. “Sports clothes, street clothes mixed up — I know how to do it.”

In the book, Jondeau said he feeds off adrenaline — and he found it in extreme sports, women, speed and in working with Lagerfeld.

“He was very lucky because he was a genius. He can do things in two minutes. It was easy for him to put his ideas on paper. I’ve seen him draw a full collection in 30 minutes. Really. It’s crazy,” he marveled.

In the book, Jondeau reveals that he chose Lagerfeld’s cremation outfit: a Saint Laurent jacket by Hedi Slimane, a custom-made Hilditch & Key shirt, a locket containing a portrait of his beloved cat Choupette, the red Hublot watch Jondeau gave him as a birthday gift and a Chanel pouch in stingray that the designer toted everywhere, its contents a mystery.

Throughout his battle with cancer, Lagerfeld resisted any and all discussion about what should happen to him or Jondeau after his passing.

“I never dared to ask you for details. I knew you wanted to spare me. You knew that I was, beneath my tough exterior, a sensitive person,” he writes.

For the cover of the book, Jondeau selected an image from a Karl Lagerfeld campaign shoot in October 2018, when the disease was tightening its grip. Jondeau appears in the foreground, and Lagerfeld is in shadow, his back to the camera.

“When I look at this picture, I can’t help seeing that you are about to go, to glide from this era into the shadows, my master leaving me,” he writes. “The tables have been turned. It was always I that was in the shadow of your fame, your overwhelming presence and your strength.”

The Louvre Turns to Merch

Ai Weiwei Collaborates With Rome Pays Off for Drop