Frances Stein, who was a fashion editor, a fashion muse and a designer for Halston and Calvin Klein before helping to revive the house of Chanel, died on June 6 at her apartment in Paris. She was 83.

Her brother, Mark Patiky, confirmed the death but did not specify a cause.

Halston praised her editorial eye. So did Mr. Klein, who also likened her to a young Katharine Hepburn, but who cooled on her when a tabloid writer described his collections as being designed by “Calvin Stein.” Diana Vreeland, who gave Ms. Stein her first job in fashion, as the hat editor of Harper’s Bazaar, thought she had pizazz.

“Frances was one of those iconic fashion editors,” said André Leon Talley, the longtime Vogue editor, “with impeccable style and a certain mystique and as intimidating as polished granite. One of the sacred monsters of that time. She wore cashmere as if it were sable.”

She also had a temper. As a young editor, she was known to throw things — including coffee and scissors — if displeased.

Ms. Stein came of age in an era when fashion divas were encouraged to run amok, but also when American style was newly ascendant. Buoyed by the gains of second-wave feminism, women were striding to work in pants, jackets and sweaters, supple styles that matched their newfound economic, social and sexual mobility. Ms. Stein was among those who taught them how to dress.

She was a student at Smith College and had just returned from her junior year in Paris when Mrs. Vreeland, who was then the fashion editor of Harper’s Bazaar, interviewed her. (Mrs. Vreeland’s exaggerated personality and hyperbolic pronouncements were the model for a generation of editors.)

“The first thing Vreeland did was grab my hair and say, ‘That’s Russian hair,’” Ms. Stein told W magazine in 2005. “She hired me on the spot and sent a memo around saying that a girl with great hair had arrived. People were expecting Rapunzel.” (She did have terrific hair, colleagues recalled.)

As the millinery editor, Ms. Stein covered the man then known as Roy Halston Frowick, who was making hats at Bergdorf Goodman. When he went out on his own in 1968, he asked Ms. Stein to be one of his partners. She was among his intimate circle, along with the jewelry designer Elsa Peretti and the model and actress Marisa Berenson, about whom she said, in her W interview: “We jingled, we swathed, we went to the London flea market five times a year. We looked like we’d walked out of the Carpathian Mountains.” 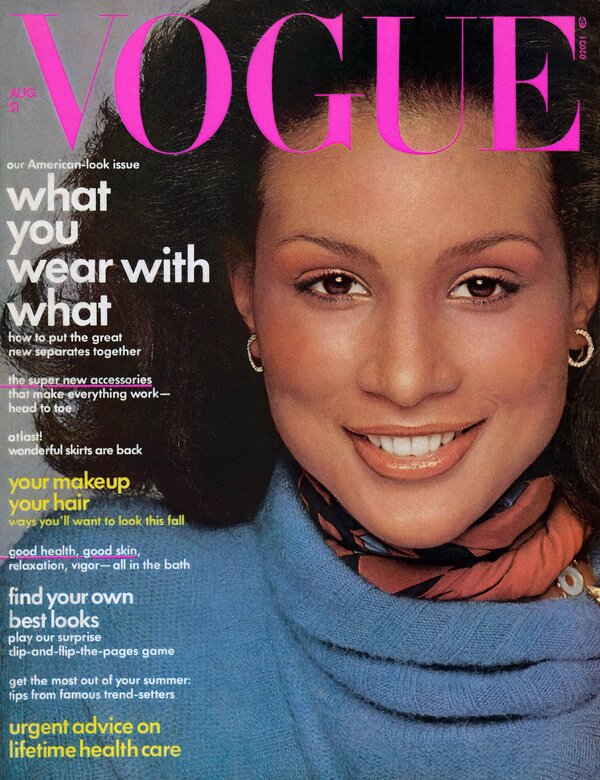 As fashion director for Vogue, her next job after working for Halston, Ms. Stein styled a young Beverly Johnson for the cover of the magazine’s August 1974 issue, making her the first Black model to grace a Vogue cover. The history-making photograph, shot by Francesco Scavullo, shows Ms. Johnson in the casual style of the time, in a soft blue cashmere turtleneck with a scarf twisted at her throat.

“Frances was a perfectionist,” Ms. Johnson told Women’s Wear Daily after Ms. Stein’s death, recalling the shoot. “As I looked down at her, she tied and untied the rust-colored scarf with a jewel pin on me maybe close to 50 times, until she felt it was just right.”

Frances Grace Patiky was born on Sept. 21, 1937, in Huntington, N.Y., on Long Island. Her mother, Frieda (Krakower) Patiky, was a homemaker; her father, Jacob Patiky, known as Jack, owned a department store in Kings Park. Frances attended Smith College for three years before dropping out to work at Harper’s Bazaar.

She joined Glamour magazine in the 1960s as a fashion editor, and then spent a few years designing for Halston. There, among other talents, “she could tie a serious obi,” said Chris Royer, a former Halstonette, as the designer’s house models were known. (Ms. Royer was referring to one of Halston’s signature wide belts, which involved all sorts of precise looping and twisting.) Ms. Stein was a master of the tweak, the drape and the tuck, Ms. Royer said, noting Ms. Stein’s habit of tucking orchids and gardenias in models’ hair.

As a fashion editor at Vogue, she covered Mr. Klein, an intimate relationship that helped the young designer find an audience for his modern style. Mr. Klein and Ms. Stein had a similar aesthetic, an affinity for the muted tones — beige, sand, taupe and brown — that defined Mr. Klein’s collections, and he hired her to be one of his designers.

That affinity may have led to their parting. She told W that when The Daily News suggested his collection be called “Calvin Stein,” he fired her.

“We were very much on the same wavelength, Mr. Klein said in a phone interview. “She had an opinion and a point of view, and her choice of clothes was always right on.”

By the late 1970s, Ms. Stein was designing accessories and some separates for Chanel, which had floundered after the death of its founder, Coco Chanel, in 1971. Ms. Stein’s modern takes on Chanel classics — her soft leather bags, ballet flats and cashmere sweaters — helped turn the company’s fortunes around.

So, too, did the designs of Karl Lagerfeld, who was hired soon after Ms. Stein to design ready-to-wear and couture. The two had an icy relationship. Mr. Lagerfeld complained of her behavior; he also said that her designs were muddying his vision for the company.

“I like some of her little cashmeres, and I don’t mind her doing all that duty-free jewelry,” Mr. Lagerfeld told Women’s Wear Daily in 1985.

Ms. Stein may not have been a fan of Mr. Lagerfeld’s work, either. “I made the mistake once of asking her if she had designed these pull-on boots,” said Jill Kargman, the author and star of the television comedy series “Odd Mom Out,” who became close with Ms. Stein when Ms. Kargman’s father, Arie Kopelman, was president of Chanel.

“They were sort of rounded and flat, and it turned out Karl had designed them,” Ms. Kargman said. “Anyway, they were not her style, which was more classic. She looked me dead in the eye and flared her nostrils and said, ‘I do not design hooves.’”

Ms. Stein designed jewelry under her own name, too — enormous cuffs, chokers and earrings that look vaguely Byzantine or Etruscan.

“I try to design things that are irresistible visually, but they also have to work,” Ms. Stein told The Associated Press in 1989. “A bracelet is great if you can pull it on and off and it doesn’t get wound up in a typewriter or dribble in your plate when you are making an elegant gesture.”

In addition to her brother, Ms. Stein is survived by a sister, Marilyn Vogler. Her marriage to Ronald Stein, an artist, ended in divorce.

A Chanel spokeswoman said Ms. Stein left the company about 20 years ago.

“I adore what I do,” Ms. Stein told The New York Times in 1982, “but I am a loner and I know I have a reputation for being difficult. This disturbs me, because most people who have worked with me know how hard I work at what I do. I’m a perfectionist.”

Marrying a Guy Who Cheers Your Career