Home » Beauty & Balance » Dogs Can Have a Little Charcuterie, as a Treat

For well over a year now, elaborate charcuterie boards have been taking over the social feeds of food enthusiasts. There have been artful assemblages of the usual items, like cheese, meat and fruit, as well as plates topped with desserts and colorful candy.

If by chance you’ve seen boards stacked with cookies shaped like dog bones and homemade jerky strips, those aren’t for human consumption.

Kristine Boyd, 51, first caught wind of the trend on Pinterest. She lives with three dachshunds — Riley, Brody and Jasper — in Orlando, Fla., and decided to make them a barkuterie board after a bit of positive news from her veterinarian.

Brody, the oldest of the trio, had been declared cancer-free after a biopsy. “I was so excited. So I decided, ‘You know what? I’m going to the Woof Gang Bakery to get some treats,’” said Ms. Boyd, who works in retail management. She splurged on specialty Snoopy and heart-shaped cookies, just because.

What started as a plate of their favorite dog treats evolved into an artistic project. “My guys love blueberries, so I thought, ‘OK, let’s add some fruit in to give it a little bit of variety and color,’” she said.

Her dachshunds seemed pleased with the result. “They have bottomless stomachs but did steer toward the fruits and veggies because they don’t get those every day,” Ms. Boyd said. She plans on making boards again for their birthdays.

Shelters across the country are recording high adoption numbers, and people are spending more time than ever around their dogs. Last year Americans spent a record $103 billion on their pets, according to the American Pet Products Association. For many of those owners, dogs are more than just pets; they’re part of the family. Barkuterie is one way to affirm that bond. 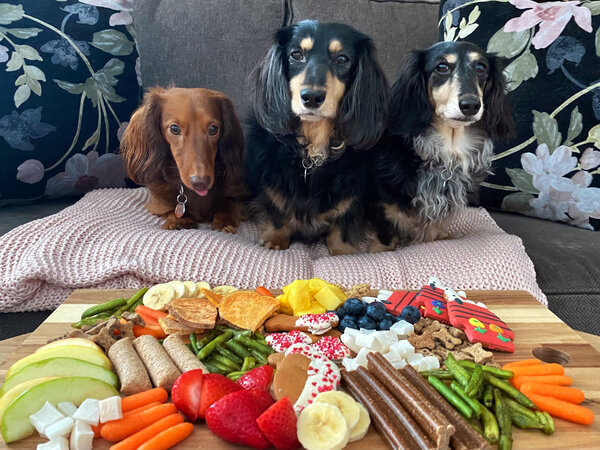 Lyndsay Shackelford, 28, made a St. Patrick’s Day board for her Beagle mix, Wilson. She whipped up “pup-sicles” with goat’s milk and kale, sweet potato chews, and sliced vegetables, then served them to Wilson with a cup of dog beer (which can be made with water, chicken or pork, and malt extract).

“He went straight for the dog beer that I put on it,” said Ms. Shackelford, who lives in Baltimore and owns the website Dogs of Charm City. “He avoided the vegetables, but he had fun with it.”

Social media’s charcuterie-board trend has been widely documented, but barkuterie has received less attention since photos of the boards began popping up on Instagram in 2019. Their popularity seems to be growing thanks to new companies selling dog-friendly snack boards, the proliferation of how-to posts on pet blogs and people seeking creative outlets for stress.

In January, Heather Raeder, a 29-year-old hospital pharmacist in Chicago, channeled her own creativity into an artfully arranged board of homemade dog biscuits, peas and jerky for her two corgis, Ellie and Crouton. Since then, she’s turned her hobby into a side hustle, selling arrangements for around $20 to dog owners throughout Chicago.

Similarly, Amanda Yu-Nguyen, 35, welcomed the chance to pursue a creative deviation from her day job. Her dining room table is now covered in the trappings of barkuterie boards featuring locally made dog biscuits and antelope jerky.

Ms. Yu-Nguyen, who works in student affairs at Emory University in Atlanta, said that her 6-by-6 boxes, which start at $30 always include a mélange of hard treats, fresh fruits and veggies (like blueberries), and dried sweet potato. Sometimes she’ll use a fancy garnish like a cucumber rose.

She’s recently started making boards that reflect her upbringing. “I’m Chinese, so going to dim sum was a big part of my childhood,” Ms. Yu-Nguyen said. “Some of the items that I put in the doggy dim sum steamers are trying to mimic what a human would eat at dim sum.” Treats that might appear in the steamers include duck feet and tripe.

From a health standpoint, Aziza Glass, a 32-year-old veterinarian, said the boards, made with dog-safe food (hold the cured meats and sweets), could be “a great way for pet parents to become involved in the nutrition in the meal preparation of their pets.”

She recommends using crudités like carrot and cucumber strips, blueberries, bananas and strawberries, as well as a low-sodium turkey jerky. Going this route, Dr. Glass said, rather than piling the boards with biscuits, helps prevent gastrointestinal issues.

There’s a fine line between nurturing and spoiling one’s pets, and portion control is key to that distinction. After snapping a picture of her dachshunds with their platter, Ms. Boyd served them individual plates to keep them from overeating.

“I don’t have kids of my own, so I definitely treat mine like kids,” Dr. Raeder said of her corgis. And what do kids love more than snacks made just for them?