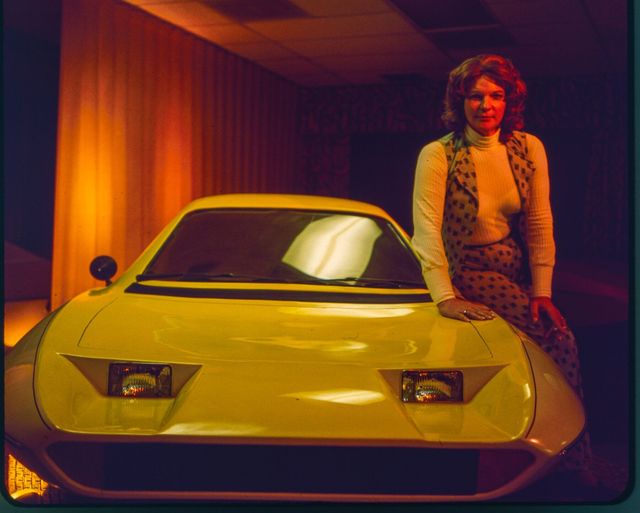 Automotive enthusiasts might know the story of the Dale three-wheeled car, the promising early-‘70s vehicle that was going to “…put Detroit out of business.” But there’s a lot more to the story than that. Oh man.

The Dale itself was a timely idea. It arrived smack in the middle of the 1973-1974 OPEC oil embargo that had every Malaise-era car owner in America lining up for blocks to get gas. That embargo eventually raised the price of a gallon of fuel by 300 percent. People were getting desperate. Right then, the three-wheeled, two-seated Dale appeared, promising 70 mpg and a sticker price of under $2000.

Give the people what they want.

The Dale concept was originally thought up and a prototype was made by a guy named Dale Clift. Then Elizabeth “Liz” Carmichael made Clift a deal, promising him $3 million in profits if she took over production and development. The car was unlike anything on the market at the time and almost anything ever made. It had two wheels in front and a single, driven wheel in the back. There are a few of those on the market now. Though Carmichael never got too specific about the powertrain, or really about anything that made up the car, it was later determined that the engine was a BMW flat twin, a motorcycle engine. The body was allegedly made of “rocket structural resin… stronger than steel or aluminum pound for pound.” Top speed was claimed to be 85 mph.

“Cruises at 55 mph in velvet-smooth quiet, on air shocks,” the brochure promised.

Carmichael claimed that she’d driven the car into a wall at “30 mph, 40 mph, and even 50 mph” and came away with no more than a scratch. 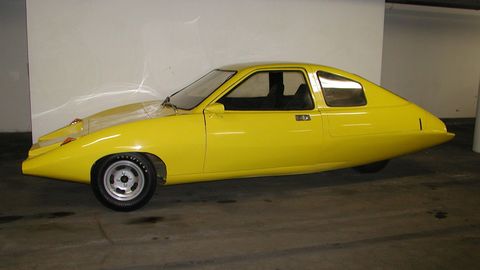 It sounded too good to be true, but that didn’t stop people from lining up to make deposits on it. According to The Lady and the Dale, a four-part docu-series that premiered on HBO MAX this past weekend, all that deposit money was supposed to go into an escrow account and remain fully refundable. However, Carmichael was using the deposit money to fund development of the car instead, which was illegal. When the media dug into the story, that was one thing they found out. Subsequent investigations by both media and government found out much more.

The first of the documentary’s four installments starts out telling the story of a con man and counterfeiter named Jerry Dean Michael. Michael had been married three times, with two children from each of his first two marriages, the families of which he abandoned, and five kids from his third, and apparently lasting marriage. He crisscrossed the country, always one step ahead of the law, going from one con to the next. He was a door-to-door salesman, he came up with business ideas and gathered investors, and at one point he started printing U.S. currency. That latter pursuit is called counterfeiting, and might have been a really bad idea, as it got the attention of Federal law enforcement. The Feds don’t give up quite as easily as the local police he had been evading before.

By the time he moved to Los Angeles and took over the Dale project, it was the family’s 21st move in three years. You’d think that would be tough on a family of seven, five of whom were young children. But two of the children interviewed for the movie spoke lovingly of Carmichael. They seemed to accept the moves and their parents’ transition as just the way things were.

Carmichael had started her transition to womanhood in 1966 and by 1974 was mostly there. Most the documentary is about that transition, hung on the fraud of Dale development.

Or was it fraud? Could she have really pulled it off if? Closeups of the one non-running show car and what might have been two development mules show a fairly crude setup. The “rocket structural resin” might have been nothing more than fiberglass. It’s never clear what the frame of the car was made of. The drive method to get torque from the rear-mounted BMW flat-twin to the rear-drive wheel was never really clear. In fact, it might have been front-mounted. Brochures and video differ. So who knows? The stability of the car was questionable, too, it almost rolled over in one demo drive for potential investors.

But many of the engineers interviewed in the film were certain that it could have worked. The implication is that development surely could have progressed further if the media hadn’t shown up. But how far could it have progressed and at what cost to depositors? The whole thing sounds reminiscent of other automotive hopefuls. If you recall, the Shelby Series One was also to be funded by buyers, and they did wind up making some of those. So who knows?

A minor quibble: Much of the story is told through what’s called “an arresting and inventive technique of marrying archival material with photo collages.” The photo collages are cut-outs of still figures posed in stop-action animation to suggest movement. The technique is used an awful lot. Maybe it gets tedious. But the number of interviews of the actual participants in the story is impressive, and it’s all put together in a smooth documentary style.

It’s all very sympathetic to its main subject, too, portraying each incident in the best possible light, no matter how criminal. Reporters are shown as the enemy, and one reporter in particular displays a real anti-trans bias. (That reporter’s son goes on to be a major figure in TV news today, which might give you a chuckle.) Overall, the story is more about transgender rights than about the car. If the idea was to portray the struggles of transgender individuals, a noble goal, why not pick a subject who hadn’t been arrested so many times?

“The Lady and the Dale is a riveting, human portrait of an imperfect trans trailblazer, an industrious businesswoman and a beloved mother whose ambition and unwavering optimism ran headlong into widespread transphobia and media bias,” the film’s promotional material reads, as if it was transphobia and media bias and not the subject’s criminal record that was the problem. “Her life leaves a complicated legacy. Ahead of her time, forced to operate in an unaccommodating world, Liz Carmichael stands as a heroic reminder of the prejudices facing the trans community and as a symbol of untrammeled enterprise and survival.”

But there is a lot about the car, too, and chances are Liz Carmichael’s story will remind you of a few other colorful characters throughout automotive history who have tried to launch their own car companies. It’s a lot harder than it looks. Pick your favorite antihero. And if you want to see a real Dale, the Petersen Automotive Museum in Los Angeles has one.

The series debuted with two back-to-back episodes. New episodes air on subsequent Sundays at 9:00 p.m. ET/PT on HBO and will be available to stream on HBO Max. If you catch it, let us know what you think in the comments below.