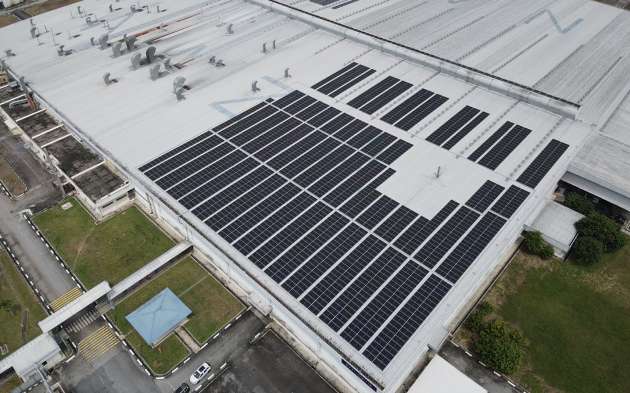 Stellantis has announced its partnership with Leader Energy Group to expand the solar power energy generation system at its plant in Gurun, Kedah. The first rooftop solar photovoltaic (PV) system was installed at the Gurun plant in October this year.

The partnership will see further installation, operation, maintenance and financing of PV solar systems at the plant. Leader Energy Group is a Malaysian-based power company with over 20 years of operations in the power sector across Asia Pacific.

Once in operation, it’s said that the PV solar systems will generate a maximum output of 2,189.81 kilowatt peak (kWp) electricity. Over the next 21 years, it’s projected that the PV systems will generate 54.811 gigawatt hours (GWh) of energy which will account for around 34% of the plant’s annual energy consumption. The solar energy system is also expected to offset approximately 1963.4 tons of carbon dioxide annually – the same effect planting 50,340 trees a year would have.

“This partnership is a positive step for the ASEAN region and will assist Stellantis in achieving its industry-leading target of carbon net zero emissions by 2038, as mapped out in the Dare Forward 2030 strategy,” said Christophe Musy, head of ASEAN and general distributors, Stellantis.

Full owned by Stellantis since November 2021, the Gurun plant produces Peugeot vehicle including models like the 2008, 3008, and 5008 locally and to other ASEAN countries such as the Phillipines, Thailand and Cambodia.