There are always debates about which race is the toughest. You have your Baja guys saying they go 1,000 miles non-stop through desperate terrain down in Mexico. You have your Dakar guys saying their race lasts a week and covers 5,000 miles. There’s probably even some guy who says he suffered at the Goodwood Fesitval of Speed because his champagne went flat before the final serving of the epicurean luncheon buffet. They all have good points (and we’ve been to Goodwood, so we know). But you could make a terrific argument that no one suffers more than those who run the King of the Hammers.

KOH was founded 14 years ago by a group of guys who went four-wheeling out in Johnson Valley, a wild wasteland in the California desert two hours from L.A. They had established routes up dry canyons strewn with boulders the size of your average Volkswagen. Just designing a vehicle capable of ascending these boulder-blocked bruisers was an accomplishment. New technology and new vehicles had to be designed, engineered and invented in order to do it. 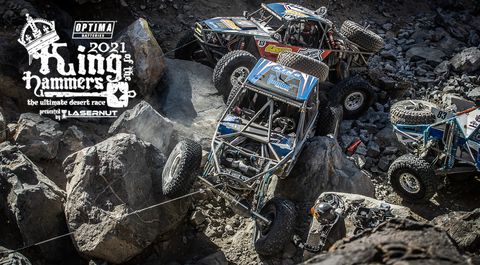 Then they drove them up the trails, many of which trails had “Hammer” in their names: Sledge Hammer, Jack Hammer and other Hammers. Or they tried, a lot of times the rigs would break, but helping your buddy fix his rig and limp home was half the fun. Then one day someone said, “Hey, has any one of us ever done all the Hammer trails in one day?” It was a feat that was assumed to be impossible. So they did it. The guy who did it fastest was the King, King of the Hammers.

The very first year, 2007, a guy named JR Reynolds was The King. His co-driver that year was Randy Slawson. Slawson would go on to win the event three times on his own, the most recent being last Saturday, when Slawson crossed the line in seven hours and 17 minutes, beating JP Gomez of the magnificent Gomez racing family by just nine minutes. Third place went to Raul Gomez, of the same family, who crossed the line 34 minutes later.

Bailey Cole was fourth but, amazingly, Formula Drift champion driver Vaughn Gitten Jr., the guy you see in all those crazy drift videos, finished fifth, making him one of the most truly versatile drivers active today. 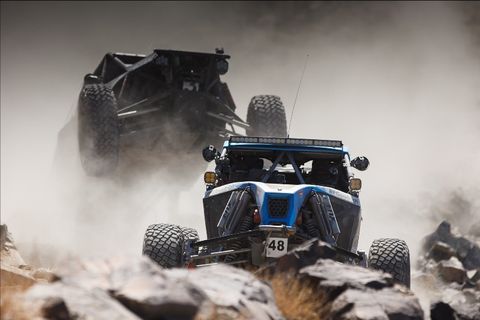 But this year’s KOH glory went to Slawson, who lives for this race.

“My year begins and ends in February. It’s not in January, like everybody else’s,” Slawson said. “This is the only thing that I live eat, breathe sleep, dream – King of the Hammers.”

Attrition in 2021 was as high as ever, race organizers said, with only 37 of 84 competitors reaching the finish line within the 14-hour time limit. There were numerous lead changes, mechanical carnage, and drama as the race unfolded over 190 miles of unforgiving terrain in Johnson Valley, the largest Off Highway Vehicle (OHV) area in the United States. In the end, Slawson and his cousin and co-driver Dustin Emick joined Shannon Campbell and Jason Scherer as three-time winners of the event. (You could say he is a four-time winner if you count his win as a co-driver with JR Reynolds, the first winner; the co-driver is the guy in the passenger seat who provides vital assistance rigging the winch and fixing the flats. Maybe Slawson is a 3.5-time winner. You guys debate that amongst yourselves) For his efforts, Slawson took home a $65,000 pay check and a brand-new Ford Bronco.

While Slawson was not piloting a Bronco, Gitten Jr. and two other racers were – former Kings Jason Scherer and Loren Healey, who finished ninth and 13th respectively, were in Broncos. 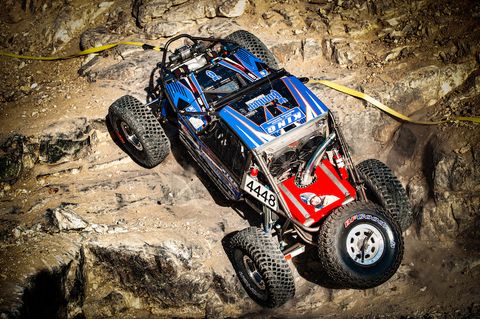 Scherer and desert racer Cameron Steele shared the lead early in the race, but both had issues that pushed them back in the standings, organizers said. Fuel management was an issue for not only Scherer but contender Wayland Campbell as well. Scherer’s navigator Jason Berger, known for his physical fitness, ran into the main pit to retrieve fuel, and Andrew McLaughlin pulled Campbell in to the pit. King of the Hammers is a “no chase” race, meaning that racers can help each other but can’t receive other assistance outside of the designated pit locations. They don’t dock you for checking to see if a fellow competitor is injured, as Steele and others did during the race, but otherwise, you’re on your own out there.

Perhaps most amazing is that UTV winner Kyle Chaney and last year’s UTV winner Hunter Miller finished 11th and 12th overall in their Can-Am Maverick X3s against a field of unlimited cars with V8 engines and 40-inch-tall tires. 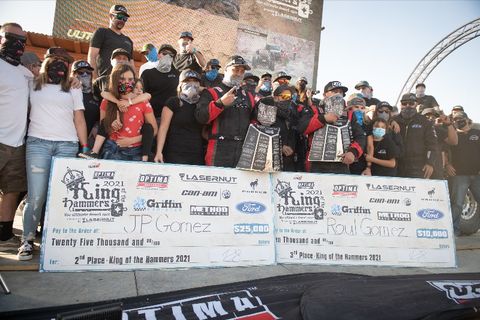 The King of the Hammers actually lasts all week, with headlining events leading up to the big KOH on Saturday.

The Can-Am brand of UTVs swept the podium in the “Can-Am UTV King of the Hammers Presented by Progressive” race on Monday, Feb. 1, with Kyle Chaney, Cody Miller, and Phil Blurton finishing one, two, and three.

Trystan Hart won the All Balls Racing Group King of the Motos race for motorcycles the afternoon of Tuesday, Feb. 2.

And there were other events as well, making it a week-long festival of dust, dirt and delirium in the desert. Make plans now to be there next year.