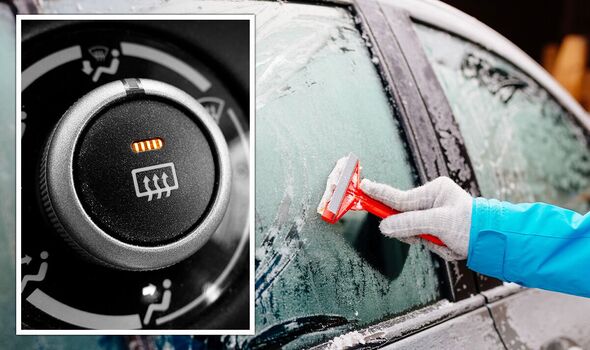 Amid the wintery weather conditions this December, Ed Colley, Head of Marketing at Autoglass, has urged UK drivers to defrost their windscreens correctly to avoid further delays and “excessive repair costs” over the holidays.

Mr Colley said: “While some may be excited about the prospect of a white Christmas this year, the cold wintery weather also means that drivers across the UK will have to get used to waking up to the dreaded frosted car windscreen for the next few weeks.

“Many will want to remove frost as quickly as possible so they can be on their way, but using the wrong method to tackle ice and snow on the windscreen risks further delays and excessive repair costs.

“Sudden changes in temperature are one of the most common causes of a windscreen chip turning into a crack, requiring the whole windscreen to be replaced, so anything that involves excessive heat is out of the question.

“While running outside with a boiled kettle might be the quickest route to a clear windscreen, it’s also one of the riskiest, so we’d suggest giving it a hard pass.

“Turning the engine on and heating the windscreen from within might appear like a harmless method, but it’s hardly going to be the cheapest given price rises at the pumps this year, and it also comes with a completely avoidable environmental cost.

“As tempting as it may be to reach for a random flat surface, such as credit card, lunchbox, or school folder, it’s also opening you up to the risk of small scratches that can jeopardise the structural integrity of the glass and could cause you to fail your MOT.

“Instead, we’d urge drivers to reach for the humble scraper, or simple de-icing spray, which are guaranteed to remove frost and snow without risking costly damage to the vehicle.

“Another option is covering your windscreen with a piece of polythene the night before. For extra smug points, you can also apply a rain-repellent product to the windscreen which makes de-icing easier, saving you time on these cold winter mornings.”

Experts at Lotus Car Rental have also shared some “top hacks” for not only getting rid of the ice on the car, but preventing it too. These include…

Rub onion on top of the windscreen

Onions have a similar effect to vinegar, and if you don’t have an onion in the cupboard, then drivers should try potatoes instead.

The sugar molecules from these vegetables can work to break down frost as soon as it forms on the window.

Book your MOT with the UK’s #1 MOT tester – just click the link to book online.

Rub onion on top of the windscreen

Onions have a similar effect to vinegar, and if you don’t have an onion in the cupboard, then drivers should try potatoes instead.

The sugar molecules from these vegetables can work to break down frost as soon as it forms on the window.

Use a bed sheet if your car is parked outside

Putting a bed sheet or large piece of cardboard over the windscreen and using the wipers to hold it in place overnight is an effective and cheap way to shield it from the ice.

Spray vinegar on the windscreen the night before

With a little forward planning, drivers can stop frost from forming in the first place, and spraying the windscreen with a solution of mixed water and vinegar will help with this.

Vinegar is often used as a de-icer because its freezing point is much lower than water’s, meaning the water doesn’t have the chance to settle and freeze on top of the vinegar.

Use a proper car ice scraper

If drivers are in more of a rush, they can start to scrape the ice as the car warms up. However, don’t be tempted to cut corners and grab the nearest flat object, like a bank card.

Attempting to scrape bits of ice off with anything other than a car ice scraper could just result in a scratched windscreen.

Brussels Is Offering Nearly $1,000 to People to Give Up Their Cars

Italy wants supercar brands to be exempt from 2035 ICE ban