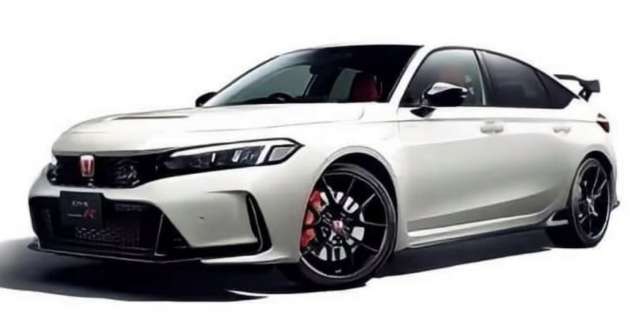 The next-generation Honda Civic Type R is one of the most hotly anticipated cars of the year, and we will finally get to see the production version a week from now on July 21. However, the Japanese carmaker accidentally let slip its latest hot hatch long before we’re supposed to see it.

A member (Palmer8) of the Civic11Forum recently spotted an image of the all-new Civic Type R alongside other models that will be exhibited at Honda’s visitor centre website (Honda Welcome Plaza Aoyama). It’s just a front quarter shot for now, but it pretty much confirms what we already expect.

The successor to the FK8 Type R will be based on the FL Civic Hatchback, but with specific design cues to complement its performance capabilities. For starters, the front bumper is a lot more aggressive and features a large lower intake as well as ducts in the corners to cool the beefier brakes.

The main upper grille has also been opened up to get more air into the engine bay, helped along by a bonnet vent for better cooling. Wider tyres and new side skirts are also visible, as is a prominent rear wing finished in black – the car itself is finished in white.

Based on the low-res image, we can also make out what appears to be red seats that are typical of past Type R models. A six-speed manual transmission will also be part of the cabin, which will likely be very similar to the standard Civic Hatchback, albeit with sporty touches.

Honda has yet to reveal much about the CTR’s powertrain, but we know it will be front-wheel drive since the company previously announced it managed to see a new FWD track record at the Suzuka Circuit. The drivetrain is expected to be paired with an upgraded version of the existing K20C1 2.0 litre turbocharged four-cylinder engine, which currently makes 320 PS (306 hp) and 400 Nm of torque in the FK8 Type R.

We’re still a few days away from an official debut, but based on this leak, what do you think of the new CTR? Is it better looking than its predecessor? Share your thoughts in the comments below.